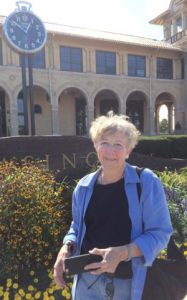 Catherine, aka Sam, shared stories from her experience as a King County prosecutor, including sharing an office with police, to illustrate the role of the prosecutor and the difference between the work of prosecutors and police.

One of the differences she explained was the difference in strategic thinking about cases. Prosecutors tend to think more broadly about criminal acts whereas police need to focus on facts related to individual criminal convictions. She described this difference in approach as complementary rather than divisive.

In response to questions from the audience, she said that the prosecutor/police relationship in Seattle/King-County is not as political as, for example, in NYC or some small towns. She was surprised, recently, to serve on a jury, and how impressed she was at the deliberative process of the group and how nothing was rushed.

She also pointed out that Washington families have more impact on sentencing than you might think, even though Washington has narrow sentencing guidelines. The District courts have more leeway.

Catherine encouraged SinC members to take advantage of opportunities to ride with police officers and/or to attend a Community Police Academy (see below). Finally, she briefly discussed her own writing and why she entered contests—especially in the UK.